Amazing cars featured in television shows have caught our attention and held it for decades as we fantasize about fast, powerful and in some cases, talking vehicles with a wide range of gadgets. At Carstar Black Hills Autobody, we love cars and that’s why we fix them every day and these are some cars we can dream about owning.

After polling car fans all over the country (we thought it would be best to go outside Cottonwood, AZ) we came up our list of the Top 5 Most Memorable TV Cars of All Time and here they are: 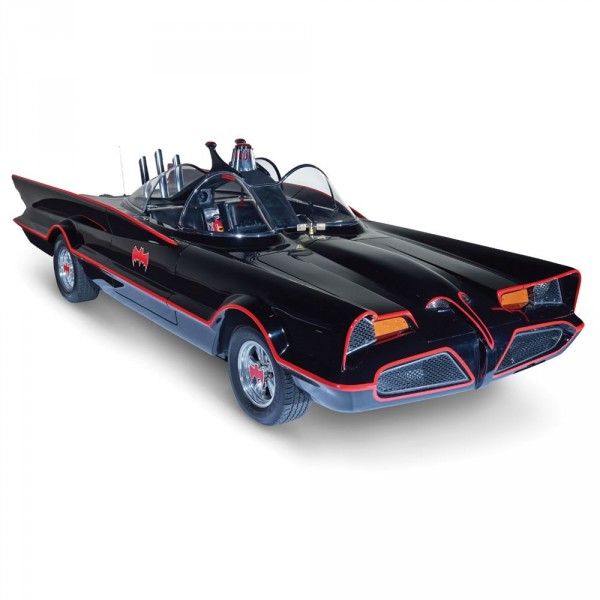 The Batmobile from the 1966–1968 live action television show has to be at the top position of any list about iconic TV cars. In 1965, ABC-TV chose famed Hollywood customizer George Barris to design a "Batmobile" for their soon-to-go-into-production Batman show. Dean Jeffries worked on the design and initial fabrication for the Batmobile, using a 1959 Cadillac, but when the studio wanted the car faster than he could provide, he turned it back to George Barris. With only three weeks to finish, Barris decided that rather than build a car from scratch, it would be best to transform a Lincoln Futura and hired Bill Cushenberry to do the metal modifications to the car. When filming for the series began, several problems arose due to the age of the car, as it overheated, the battery went dead, and the expensive Mickey Thompson tires kept blowing. By mid-season, the engine and transmission were replaced with a Ford Galaxies’. The most frequent visual influence of this car is that later Batmobiles have a rear rocket thruster that usually fires as the car makes a fast start. 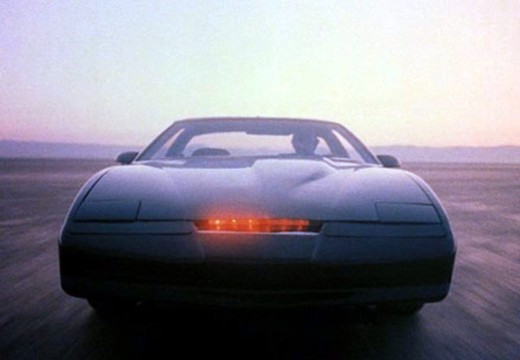 Viewers loved this talking vehicle because it was smarter than its driver. There were two KITTs featured on this popular show featuring David Hasselhoff, which appeared originally from 1982-1986 and then again from 2008-2009. The first KITT was known as the Knight Industries Two Thousand, which appeared in the original TV series Knight Rider, and the other as the Knight Industries Three Thousand, which appeared first in the two-hour 2008 pilot film for a new Knight Rider TV series and then the new series itself. In both instances, KITT is an artificially intelligent electronic computer module in the body of a highly advanced, very mobile, robotic automobile: the original KITT as a 1982 Pontiac Trans Am, and the second KITT as a 2008/2009 Ford Shelby GT500KR. 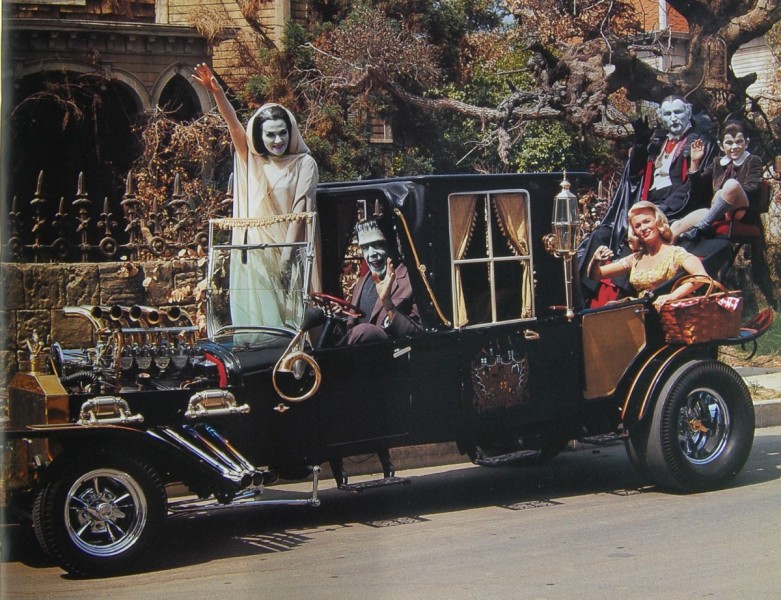 Along with the Munster Coach, the DRAG-U-LA was one of two cars designed by Tom Daniel while working for George Barris and Barris Custom Industries for the television show The Munsters, appearing from 1964-1966. The fiberglass body of DRAG-U-LA was built from a real fiberglass coffin that Richard "Corky" Corks was able to purchase from a funeral home in North Hollywood. Korky  Korkes stated in 2013, it was illegal to sell a coffin without a death certificate. Korky made a deal with the funeral director, paid in cash, and it was agreed the coffin would be left outside the rear door of the funeral parlor where the Barris crew would collect it after dark. It featured a 350HP, 289CI Ford Mustang V-8 engine, with a four-speed stick shift. It had two four-barrel carburetors mounted on a Mickey Thompson Ram-Thrust manifold. 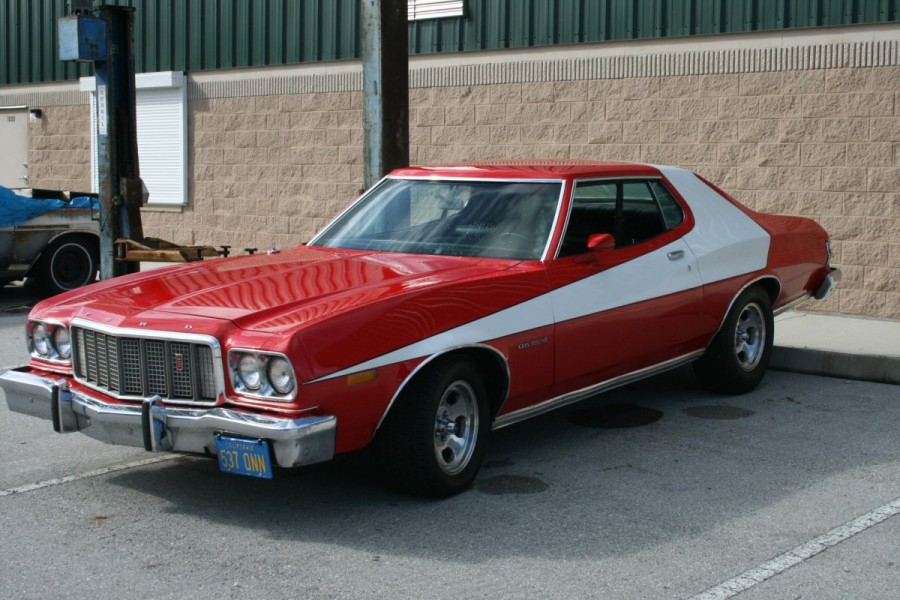 The vehicle of choice on Starsky and Hutch (1975-1979) was Starsky's two-door Ford Gran Torino, which was bright-red, with a large white vector stripe on both sides, they used around four different cars for filming, earlier shots had red wing mirrors usually for long shots or footage used in later episodes, close ups and later episodes had silver wing mirrors. The Torino was nicknamed the "Striped Tomato" by Hutch in the episode "Snowstorm", and fans subsequently referred to the car by that nickname, too. However, this moniker didn't come from the writers - it came from a real-life comment that Glaser made. 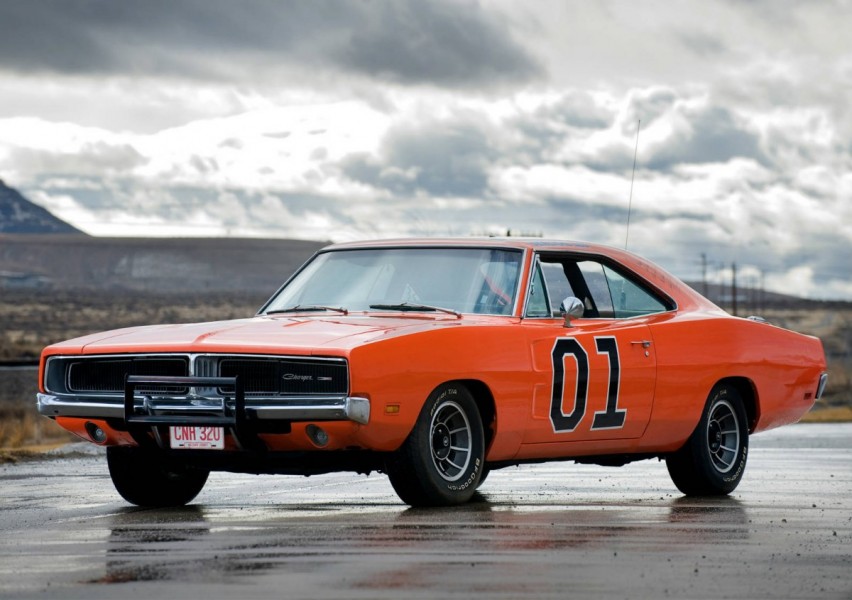 Driven by the Duke Cousins Bo and Luke; along with cousins Coy and Vance Duke, this powerful back roads racer in the television series The Dukes of Hazzard made a lasting impression on viewers of this highly rated series. It is known for its signature horn, its police chases, stunts — especially its long jumps — and for having its doors welded shut, leaving the Dukes to climb in and out through the windows.  The car's name is a reference to American Civil War general Robert E. Lee and for many years it featured a Confederate flag on its roof, until professional golfer Bubba Watson purchased this car at auction and subsequently had it removed from the vehicle.