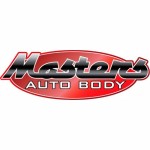 At Masters Auto Body & Paint, Inc., we love working on cars and by fixing them back to their pre-accident condition, we believe we're artists and craftsmen, and see cars as a form of art.  And we’re not the only ones. There is a movement out there in the U.S. right now that puts a great deal of appreciation on the motor vehicle, and it's called the Art Car Revolution. 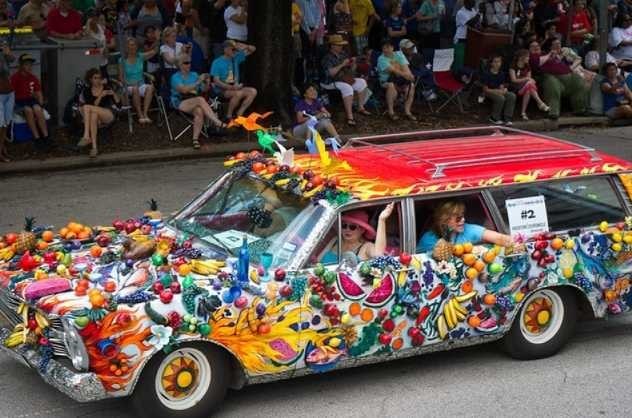 The Revolution Was in the Cars

The Art Car Revolution started in 1984 when a Houston artist named Jackie Harris transformed a car into a mobile work of art with a budget of $800 for paint and plastic fruit. She took a 1967 Ford station wagon and transformed it into a "Fruitmobile" that was auctioned off to raise money for charity. Later that same year also in Houston, local artist Ann Harithas curated an exhibition called "Collision" at Lawndale Art Center that featured two art cars.

Pretty soon, people were seeing more and more art cars on the streets of Houston and quickly national media began following the phenomenon. 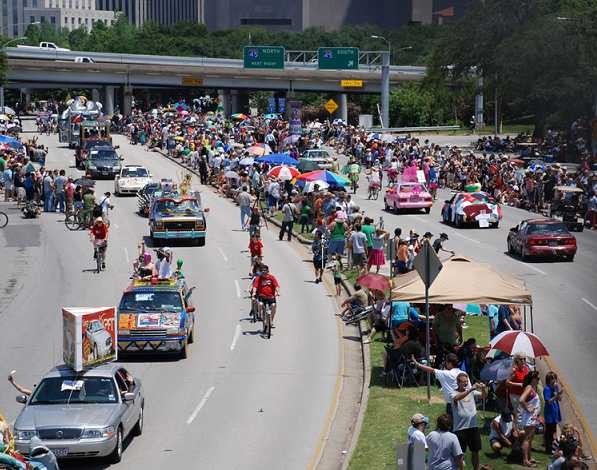 The Art Car Parade was born in April, 1988 with a 40-car parade seen by an estimated 2,000 people. By the following year, the parade doubled in size and the crowd swelled to tens of thousands.

Today, the Art Car Parade is the highlight of a three-day celebration of the drive to create, Art Car Weekend. The parade attracts 250+ vehicles and other entries from 23 states along with Canada and Mexico in front of a live audience of some 250,000+ spectators. Parade entries include anything on wheels from unicycles to lawnmowers to cars and go-carts. Entries are as likely to be made by members of the general public as by recognized artists and community groups, public and private schools. In addition, professional organizations have become regular participants. Inspired by what they see, spectators create art cars of their own and often become future participants. And as the parade grows, attracting more and more contributors, the complexity and quality of the entries increases.

In 1998, the Art Car Fest was established in San Francisco, CA and in 2001, it was held in New York City. Since then, cities from Austin, TX to Portland, OR and Oklahoma City, OK have held Art Car events that have gained national attention. There have also been several art cars featured at Burning Man and at large automotive shows and car rallies worldwide.

The Two Most Famous Art Cars of All-Time 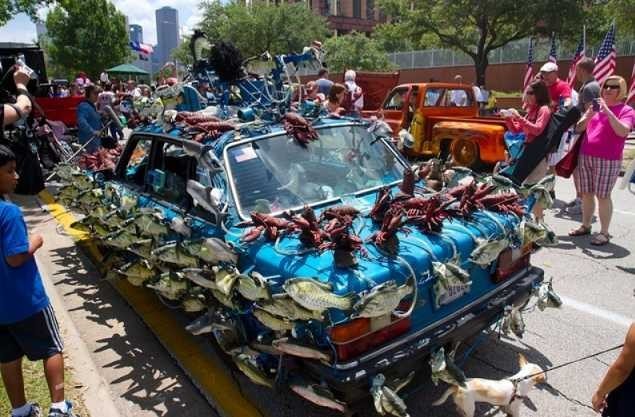 The Sashimi Tabernacle Choir: If one singing, dancing fish can be that annoying, what can you say about 300 of them? A team of over 30 volunteers created The Sashimi Tabernacle Choir Art Car in 2001. Since then the Choir has been under continuous modification and reprogramming. Featuring more than 3,000 computer controlled lobsters, bass, trout, catfish and sharks, the Choir performs a repertoire ranging from pop tunes to classical opera.

All songs are tightly choreographed by an energetic orchestral conductor, The Lobster Formerly Known as Larry. Exceptional solos performances are, of course, provided by The Three Basses: Jose Carperas, Placido Dolphingo and the unparalleled Luciano Ichthyology. Less like an art car and more like an attraction at Disneyland, the Sashimi Tabernacle Choir is probably the most famous of its type in the world. 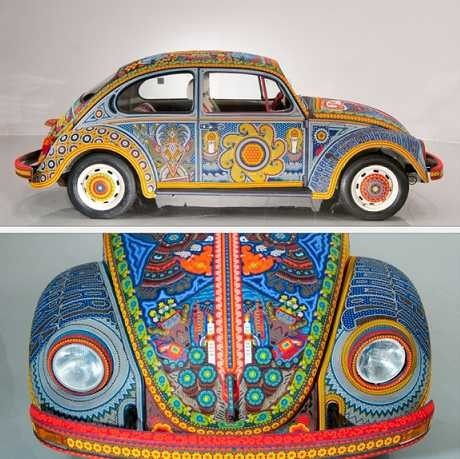 The Vochol: Originating in the heart of Mexico, the “Vochol” is a VW Beetle transformed into unadulterated cultural artwork. This was achieved by applying traditional “Huichol” directly to a humble Beetle. The name Vochol was derived using “Voho”, the Mexican term for VW Beetle, and “Huichol” refers to the native Mexican tribe. The project served as modern day tribute to traditional Huichol craftsmanship and skill. Sponsored by a number of public and private organizations, eight Huichol artists were recruited. Together they racked up 4,760 hours and applied 2,277,000 beats to complete the car.

The result was worth the hardship, because they created a beautifully decorated Beetle inside and out. The intricate artwork displayed colorful symbolism and images of their deities. Unbelievably this remarkable tribute to Huichol used over 300 pounds of beads and resin!

So, the next time you hear about an Art Car event near Oakdale or anywhere in the state of CA you really should check it out. Cars are truly art and Art Cars are something even more, so all of us at Masters Auto Body & Paint, Inc. hope you get to see a few in the very near future!