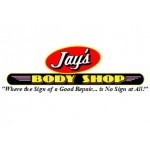 Located in El Reno, Oklahoma, Jay’s Body Shop specializes in professional collision repair, restorations, front end alignments and more! We use all modern equipment and the latest industry techniques to restore your vehicle to its original condition.

If you visit other cities in this country, you have learned that bad driving etiquette isn't just exclusive to El Reno. Bad moves executed by boorish drivers have become more than just a trend; it's now a full-blown, over-the-top, crazed and chaotic situation and we see the results of it often here at Jay's Body Shop.

Automotive fatalities are down, because cars are safer. But, there are more fender benders and minor accidents in all of our major cities, because haphazard, over aggressive driving that simply lacks common sense has become the norm.

Here is our list of Bad Moves Committed by Boorish Drivers. Does that mean that they're bad people? Probably not, but if their next boorish move might threaten your safety, well, that's a different matter completely.

Involves drivers coaxing pedestrians who are trying to cross a crosswalk by honking or crowding them.

This is at an all-time high, especially with today's cars that are so much faster and with more people rushing around. In most cases, the driver tailgating is trying to speed things up, but most people don't respond positively to tailgaters. In fact, many folks say they slow down when people start tailgating their vehicle. It's a foolish practice, because if the car in front slows down for whatever reason, the tailgater does not have sufficient time to react.

Speeding is always potentially perilous, but people who drive considerably under the speed limit are just as dangerous. If you know that you drive too slow, stay off the highway or at least drive in the slow lane as often as you can. People who drive 20 miles under the limit in the fast lane can cause major bottlenecks and even worse--serious accidents.

Double-parked vehicles can negatively impact the flow of traffic, causing other motorists to find their way around them. For commercial vehicles, double parking is considered kosher even though it is always illegal. But, too many people double park just because they're lazy and don't want to spend the time or effort to find a parking space.

Driving in busy areas with high beams on

At night, your high beans can blind oncoming traffic, making it more difficult for vehicles to safely see where they're headed. If your standard beams don't illuminate the road enough, get new ones, but keep your brights off whenever there are other cars in your vicinity.

Refusing to yield right-of-way to other vehicles

Merging means entering the lane without impeding the traffic that's already there, but some people hear the word merge and they immediately think Banzai!

This patented move causes more accidents than you would ever imagine. It comes down to simple communication between drivers and a surprise, unanticipated lane change can lead to serious, multi-car collisions.

These are just a few obtuse bad moves committed by boorish drivers and we could come up with at least a dozen more rather easily. Hopefully, if enough people can read this list and take it to heart, drivers here in El Reno and all over the state of OK, will help to make it a less dangerous state for everyone on the road.