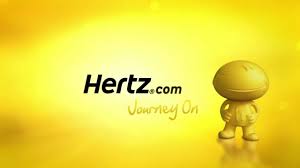 The Hertz Corporation, a subsidiary of Hertz Global Holdings Inc[3] is an American car rental company with international locations in 145 countries worldwide.[3] The company is based in Estero, Florida.[4] Hertz is the largest U.S. car rental company by sales.[4] On May 7, 2013, it was announced that Hertz would relocate its corporate headquarters to Estero, just outside Fort Myers in Southwest Florida.[5][6]

The company was founded by Walter L. Jacobs in 1918, who started a car rental operation in Chicago with a dozen Model T Ford cars. In 1923, Jacobs sold it to John D. Hertz who made it a subsidiary of his Yellow Truck and Coach Manufacturing Company and renamed it "Hertz Drive-Ur-Self System".

He sold a controlling interest in the Yellow Truck and Coach Manufacturing Company (and hence also 'Hertz Drive-Ur-Self') to General Motors in 1925 who then purchased the remaining shares in 1943.

On June 13, 2005, Ford issued a notice that Hertz would be let loose in an initial public offering. On September 8, 2005 it was announced it was to be sold to private equity companies Clayton, Dubilier & Rice, The Carlyle Group and Merrill Lynch Global Private Equity for $15 billion in cash and debt acquisition.[8] The sale was completed on December 22, 2005. This private equity group took Hertz public on November 16, 2006.

In November 2011, Hertz introduced ExpressRent kiosks at a number of locations. This was the first large scale car rental kiosk deployment in the U.S. using a live agent assistant via video chat.[10]

On January 3, 2014 it was reported that Hertz shares had jumped in value by 2.6% after the reported purchase of 30-40 million shares by billionaire Carl Icahn in what was believed to be a hostile takeover attempt. In response to Icahn’s reported share purchase the Hertz Board reportedly stated that it would issue one preferred share for each current share in what is referred to as a “poison pill” response.[11]