Will my car be worth less at trade in after a body shop repair? 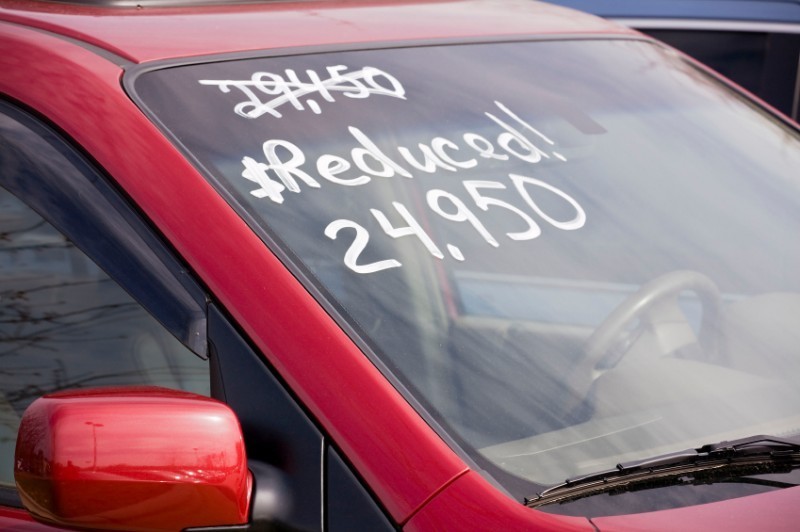 If you have been in a car accident or done some damage to your car, you are probably wondering if it will be worth less after the repair than it was before the incident. In other words, is an auto body repaired car worth less at trade in than one that has not been repaired?

The real answer is it all depends on how long you keep the car or truck.

Regardless of the severity of the auto body damage, the likelihood is strong that your car will be worth less than a comparable car with no auto body repair work come trade in time. I have seen “experts” reporting that the car could be worth as high as 33% less than the same car traded in with no history of auto bodywork. Personally I think this is a made up number because it does not factor in the mileage of the vehicle at trade-in.

However this is not a hard and fast rule. I have actually traded in a vehicle to CarMax that had over $18,000 worth of auto body repair work done to it, and the CarMax appraiser had no idea the car had been repaired until he pulled a vehicle history report. In fact that appraiser was so impressed with the work that I had done, he wanted to know which auto body shop repaired the car (it was 3D collision centers in West Chester PA in case you are wondering).

There are some instances where it might not make a difference and I will get into those in just a second.

First let’s look at when cars might loose their trade-in value if they have had body work done.

New Car dealerships generally have three mileage milestones for cars when they consider a trade in. If the car has 0-30,000 miles on it and has no damage, and is a desirable used car (and it has the “look”), then your dealer might be more inclined to give you top dollar for your trade in because they will be able to simply detail the vehicle and put it for sale on their own used car lot. This is especially true if it is a car that can be become a certified pre-owned car like an Audi.

If the car has been in an accident and has had an accident report filed, it will come up in the vehicle history report. Depending on the damage, and your dealer, It is their discretion if they want to lower the trade-in value based on the damage and the quality of repair.

If the car has 30,000- 65,000 miles on it, the dealer might still consider reselling it on their used car lot, but most likely they will just take it to auction and wholesale it. If this is the case, and the damage is minor or the repair is imperceptible (as was the case with my car) then the trade in value is likely to be near the same amount as another vehicle regardless of damage history.  However it might still be a factor to some dealers.

If the car has over 65,000 miles or over 100,000 miles, it will not make much difference at all if the car has any auto body repair history. These cars are going straight to wholesalers who will polish them up, and put them out on their buy here pay here lots.

Diminished value might not apply when selling to an individual VS. a dealership.

Of course all this does not matter if you sell your car privately. This can be a bit of a hassle to some, or no hassle at all if the car is paid off and you don’t need to sell the car in order to finance the new one.

So one way to avoid the hit to your trade in value would be to try and sell the car yourself. Auto body repair damage might not be a factor at all to an individual who is buying your car. I once sold a BMW Z3 convertible to a guy that had paint work on the hood from a rock damage, and repair work to the door from parking lot damage. Although I disclosed the damage, the new owner didn’t care that it had been repaired because he was too excited about the car.

How your dealership can tell that you’ve had auto body repair work done.

The smoking gun for most people is the vehicle history report (some may know this as a CarFax). If a police report has been filed, or an insurance claim has been made, it will show up in the history report. You can count on that. The reports will even note if it has had significant frame damage. So most dealerships pay for this service and will pull a report prior to appraising your car or truck.

Many dealerships run a vehicle history report on any vehicle brought in for a trade-in.

This report shows a vehicle’s entire history, including accident reports registrations and owners. Insurance claims also show up on vehicle history reports, so if your car’s damage was significant enough that you filed an insurance claim for the repairs, any dealerships looking at your car’s vehicle history report will see that and probably lower the amount they offer you.

Really good appraisers will be able to tell if a car has been repaired by checking for simple things like paint color matching, subtle tape lines, over spray, and chipped paint on bolts such as fender bolts and door attachment bolts.  If you are lucky your body shop was super careful and actually painted the heads of the bolts so that nobody can tell it was ever touched by a wrench, but in a high production shop, that is a rare occurrence.

What to do if you have minor damage.

Right now I have three significant repairs I need dome to my 2010 Ford F-150. I hit a pole on the front fender, I sideswiped a low barrier on the bed side, and I dropped the tailgate onto by trailer hitch ball when it slipped out of the brackets when closing it one day (I work my truck pretty hard and it shows).

All three of these repairs are going to require auto paintwork. I am not filing a claim against my insurance because they are self-inflicted wounds and I don’t want to risk an insurance rate increase. I plan on paying the truck off this summer, and then I’ll get all the work done once I am done making car payments.

These auto body repairs will not show up on a vehicle history report, and I will have them done by a really good auto body shop.  My tuck has 69,000 miles and I don’t plan on ever trading it in, so I’m not concerned about the repairs. But even if I were to trade it in, I doubt the auto bodywork would actually affect the trade in value of this truck. For one thing, used Ford trucks really hold their value and besides the bodywork, mine is in excellent condition. 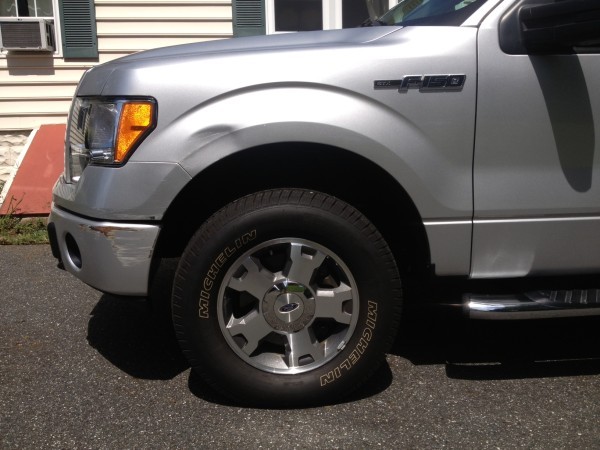 The reason I mention my situation is because there is a lesson here. Perhaps the repairs are minor enough that you might consider paying out of pocket. Take your own mileage into consideration. A high resale vehicle with non-reported well-executed auto body repair work might actually pass by your average dealership appraiser without being noticed. It is certainly worth a try. You might also consider taking it to several dealers to see what the ranges of trade in offers are locally.

I would be remiss in writing this article if I didn’t at least briefly cover “diminished Value”.

What is Diminished Value?

Besides being somewhat of a dirty word in the auto body repair and car insurance industry, Diminished value is a term coined to represent what I have been discussing all along, the diminished trade in value of a car with auto body repair work versus the same exact vehicle and condition without any auto body repairs. The so-called 33% less value as mentioned earlier.

As far as the law is concerned, the insurance company for the at-fault driver legally owes you the amount you have lost due to the diminished value of your vehicle.  It will not be easy to get though I’m warning you right now. In fact it is most likely going to require that you hire an attorney.

Many people do not know that they can theoretically recover diminished value money until it is too late . Some states have a time limit on when you can sue for diminished value, and we tend to not care about this until we are ready to buy a new car several years down the road. Other people simply do not have the legal resources to effectively present a claim and so their claim is either denied or they collect thousands of dollars less than they’re owed.

So why do car insurance companies often not pay Diminished Value claims?

Like I said above, because people don’t know about it, or they don’t have the money to properly sue for it. Another sticky aspect of this is proving the actual diminished value unless you are ready to trade the car in right now and have tried several local dealerships.

This is a sophisticated legal issue and Diminished Value laws vary state by state, so my advice is to consult an attorney and review your specific case.

Hopefully this article has shed some light on this subject. Remember to consider the vehicle condition, mileage and your plans for the vehicle before deciding which way to go. If your car is nearly new or brand new, Then Diminished Value claims might be the way you need to go. If it is an older high mileage car, then the trade in value might not even be affected at all by the collision damage.

Michael K. had this to say about Sterling Collision And Paint Center