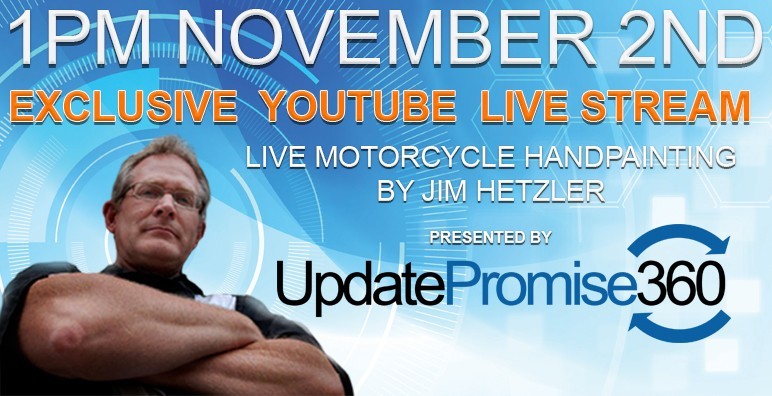 Jim Hetzler is an award winning custom painter and artist, who has been pinstriping and custom painting for over 40 years. His artwork has been showcased throughout the Automotive Industry by companies such as AutoArt Magazine, Airbrush Action Magazine, Autobody News, Street Rodder, Rod and Custom, Hot Bike, American Iron and West Coast Customs. Jim also co-owns and operates JC Hetz Studio with his wife, Chris. Jim and JC Hetz Studio will be at the 2016 SEMA Show in Las Vegas, appearing at both the House of Kolor, and UpdatePromise360 booths.

UpdatePromise360 is a leading communication and information technology provider serving the Automotive and Insurance industries throughout North America. UpdatePromise360 has created leading-edge products that outperform the competition at every level. For more information about UpdatePromise360, call or email (800) 276-9107 / info@updatepromise.com.

About the SEMA Show

The SEMA Show is one of the foremost automotive specialty products trade show events throughout the world. This year’s SEMA Show is running from November 1 - November 4, 2016 at the Las Vegas Convention Center located at 3150 Paradise Road, Las Vegas, NV 89109. SEMA is not open to the general public. To attend, go to  www.semashow.com to register.

John C. had this to say about Leehigh Autobody And Service Center

Buddy and Anthony were very professional and courteous. They explained the whole process in an easy to understand manner. Even the lady and gentleman behind the front desk took the time to let me know that they "would be right with me" when they were very busy. Much appreciated.