Could you cars black box be used against you in court or by your insurance company? 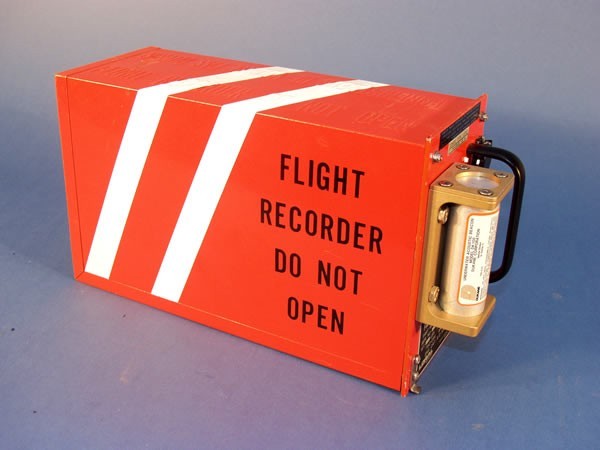 Did you know that your car, if it is a 2005 or newer car has a 64 percent chance that it has an onboard black box just like an airplane that is recording everything you do?

You are on your way to work, on a two-lane road and are about to make a left turn. You stop to wait for an opening in the traffic in the oncoming lane. Just as you begin your turn you suddenly view an oncoming car approaching from the rear in the wrong lane! It is too late to turn back into your lane and then suddenly, crunch, the car smashes into your driver’s side door. You are stuck in the middle of two lanes and your car won’t move.  As you exit your passenger door to survey the damage, you wonder why this person was in the other lane coming from behind? You realize that they didn’t see you and in a panic tried to pass you in the on coming lane only to hit your car as you were turning. It is clearly their fault. The police arrive and they tell you they cannot determine who is at fault. How could they miss it? It’s so obvious you say, you were the one who was hit, just look at the cars!

The problem is not all traffic cops are trained at accident recreation. Their job is to clear the accident, file a report and move on to the next call. “Let your insurance company deal with it” they say. So you file your claim with the insurance company and they say the same thing, because of the police report, they can’t determine fault. Infuriating right? With today’s technology, why isn’t there some way of recreating accidents from within the car? Something like a black box on an airplane?

Well guess what, there is such a device and as of this week, September 1, 2014 they are now mandatory in all new cars and trucks sold in America. And this is not new technology. In fact, most new passenger vehicles come equipped with these "black box" devices.

These so called EDR’s, short for Event Data Recorders, are onboard computer devices that record data immediately before, during, and after a car crash. Just like the devices on airliners that we are all familiar with by now, these EDRs, can help police and investigators reconstruct what happened in a crash and why it occurred. They could actually help you and your insurance company to find fault in an accident in states where at-fault accidents determine which party has to foot the auto body repair bill. 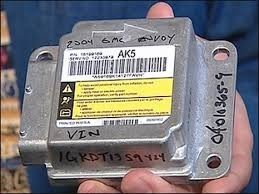 What types of information does a car’s black box record?

EDR’s typically record information such as vehicle speed, throttle position, air bag deployment, whether brakes were applied, and if the driver was wearing a safety belt. Just about every new car has sensors in the drive train, steering column, and even wheel speed sensors. All these sensors feed data back to the on board computer in real time.

There are the typical data points recorded such as speed, acceleration, braking, and there is even information recorded from inside the car. Sensors under your seat for example, the same ones used to determine weather or not to deploy certain airbags, record the number of occupants and their seating positions at the time of the crash. So if someone tried to falsely say there was another person in the car at a crash that had run away, this data would show at the time of collision there was not.

The history of the automotive black box

General Motors first introduced the black box in a very basic form on air bag-equipped models in the mid-1970s. In the 2005 model year, EDRs were being used by various manufacturers in 64 percent of all new models, according to the National Highway Traffic Safety Administration (NHTSA). The Insurance Institute for Highway Safety (IIHS) says more recent data shows all new cars have some form of an EDR. The problem has been in the differences between what specific information is gathered by each auto manufacturer. Additionally, some car companies make it easier to retrieve data than others.

The EDR has become key to insurance investigations, lawsuits and even criminal cases. But that wasn't its original purpose; instead it was originally designed for the advancement of motor vehicle safety.

EDRs are part of a car's safety system, which has to make split-second decisions. For example, whether to pull seat belts tighter or inflate the airbags as a crash is occurring. Computer modeling can only go so far, and Engineers like to see data from real-world crashes to track how those systems are working. So the EDRs save the crash data, and as safety systems grew more complex, the recorders keept saving more information. 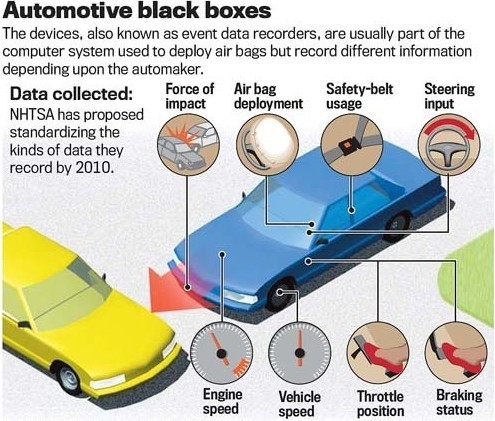 Federal mandates for the EDR and Automotive black box.

Back in 2006, NHTSA mandated that all new vehicles equipped with EDRs by the 2013 model year must make the information standardized and readily accessible by authorities.

The regulations now require that all EDRs record at least 15 specific data elements, while more advanced devices will be required to log as many as 30 elements. Advanced devices log more information about steering input, sideways acceleration, and whether electronic stability control and ABS systems were functioning at the time of the impact. Manufacturers will be required to make information about how to download the data more readily available, and to include a statement in the owner's manual saying the vehicle is equipped with such a device. As of September 1 2014, All newly manufactured vehicles sold in the US have to be equipped with an EDR.

Access to this information varies. Domestic carmakers and some import manufacturers already make access to data available to investigators using tools made by a third-party supplier, while others make it harder to obtain. Toyota in particular has faced criticism about how difficult it is to access data from their black boxes and that the company would release crash data only under court order or at the request of NHTSA.

The black box in your car paints a very detailed picture of the seconds right before during, and after a crash.

Some states restrict what insurance companies can do with EDR information and require police to get a warrant before plugging in to the box and retrieving data. But in much of the country, the laws are still in a bit of a gray area.

Technically, and legally, you the car owner, also owns the data. To not protect this data would be in many people’s minds a breach of your freedom.

Yet, currently in fourteen states including New York, lawmakers have passed legislation that say that even though the data belongs to the vehicle’s owner, law enforcement officials and those involved in civil litigation can gain access to the black boxes with a court order.

In these states, lawyers can subpoena the EDR data for use in criminal investigations and in civil lawsuits, making the information accessible to third parties, including law enforcement or insurance companies. In the hands of your insurance company, this data may be all they need to cancel a driver’s policy or raise a driver’s premium based on the recorder’s data.

Like it or not, our car’s EDR’s are here to stay. Now with recent Federal mandates forcing car makers to standardize the data, the recording methods and the retrieval methods, you can expect more and more states to argue and modify consumer protection legislation to help or hinder the use of this data.

As for the scenario that I painted at the beginning of this article, that was a real world event that happened to me back in 2003. My car was not equipped with a black box recorder and as a result, and even though I was the victim of the crash, I still had to pay my $1,000 deductible. And this accident happened just three days before Christmas. Had I had a black box, you better believe I would have used that data to sue the other driver. That is the silver lining for all car owners.

Melissa C. had this to say about Nova Automotive Center

A big thank you to Mario for doing an amazing job on my repairs and having the car done 4 days early!!!