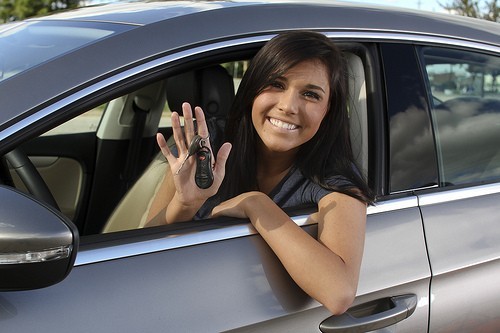 If there is one group of people truly know what a good strong and safe car is, it is an auto body shop employee. Think about it, these men and women spend every day hammering, pulling and welding twisted, accident damaged cars back into shape and putting them back on the road safely.

So if you are in the market for a good solid safe car for your new teenage driver, please read on as I discuss what a safe car is from our perspective. I will also give you a list of teen friendly cars.

I have children of my own however they are years away from driving age. But I did recently help a family member choose a safe and reliable car for a teenage cousin of mine. I have also been the go to car guy in my family for decades. I know that by going through this process how difficult and confusing it is to choose a safe teen car. First of all the information available is the same information shared from some mysterious source. Also the real life criteria for what constitutes a safe car for a teen driver have not been clearly established. I’ll start there.

This is a bold statement, but think of it this way, eight teenagers die in car accidents every single day. That data only includes deaths that occur within 30 days of the accident. If the child dies after being in a coma or simply dies after 30 days the number is not included in the national statistic. If you do the math the number of deaths really adds up. In one year, we will bury the equivalent of every single student who attends my local high school in all four grades…twice.

That is why I say there is no such thing as a safe teen car. There is not one single car built yet which will guarantee that your child will return home every single time they head out of your driveway. I’m being harsh on purpose because I want all parents to think long and hard about these statistics. The teen death rate is the only one not going down and car accidents are the number one cause of death for children under the age of 20.

Having said that, there ARE safety features that will mitigate some of the risks facing your teenage driver. And I will get to that list in just a moment.

Teens will wreck cars, of course they do, the bang them up, they bump them and sometimes they even total them out because they are inexperienced drivers, they are easily distracted and they make dumb decisions. This is why most parents look for older and cheap cars to put their kids in because they don’t want to spend a lot if anything for auto body repairs. However I beg the question, why would you want to put the most inexperienced driver in the oldest car in your household fleet?

So when shopping for a car for your teen, look past price for just a moment and start looking for the following life saving features:

In plain English, ESC will apply the brakes or automatically decelerate a car when it senses that it is about to go into a skid. This is done with various sensors within the car. This technology like all advance auto safety technologies was once only reserved for luxury cars but now has trickled down into nearly every model and has been around for years.

In an effort to make stronger and lighter, more fuel-efficient cars, manufacturers began using this new steel in the structural components of cars beginning around 2005. But be careful when using that date as it took manufacturers a few years to incorporate it into the structure of all of their cars.  A-UHSS can often be found in the door Collision beams, A-pillars, B-pillars, rocker panels and floors. American cars typically have a higher usage of A-UHSS in their construction. If you want to check if a car that you are looking at has Ultra High Strength Steel or Boron Steel, this is a great resource to use at Born Extrication http://www.boronextrication.com/tag/list-of-vehicles-with-boron-and-uhss/ 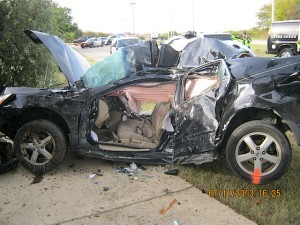 Airbags- Side curtain if possible

We all know what airbags are and what they do. But if you can possibly find a car in your budget with side curtain airbags, move that car high up on your list.

I was once a teenage boy and I am also a hot-rodder. I know all too well that horsepower and testosterone don’t mix. If you think your child is going to be a bit of a lead foot, consider a car with only 4 cylinders and definitely one without turbo chargers. Modern cars are only getting faster, not slower so think long and hard about that 0-60 time on the car you are thinking of buying.

Size of the car

Teenage drivers in small two door and small and mini cars file more than double the amount of claims as drivers aged 35-50 in those same vehicles. Teens are 2.6 times as likely to file claims on small sportier cars as well. Cars with shorter wheelbases offer greater opportunity for loss of control, and their sporty maneuverability may tempt teen drivers to take more aggressive driving risks. Additionally with the reduced crush zone found in smaller cars, teen drivers are simply more at risk when behind the wheel.

The following list is a modified and paired down version of the list that you can get from the IIHS at www.IIHS.org This list has been edited to remove cars that kids simply would not want to drive (vehicles such as mini vans) and includes cars with UHSS, are available with safety features standard such as ESC, and are generally speaking cards that teens would at least consider cool. I like to call these “bitch-proof” cars.

Also removed from the HIS list are cars that are no longer manufactured, are difficult to get parts for and do not hold up well from the eyes of an auto body repairer despite having decent 4 and 5 star crash safety ratings. No cars on this list receive three or fewer stars for crash safety.

Pricing is grouped into two groups, 10-20K and the “under ten grand land. These prices, rounded to the nearest $100, were taken from Kelley Blue Book on July 1, 2014, for the lowest trim level and earliest applicable model year.

Jonathan Y. had this to say about D&V Autobody

Travis helped me through the entire process with excellent and timely communication informing me of all relevant info and decision points. I was already a DnV customer before this work but I am more so now.