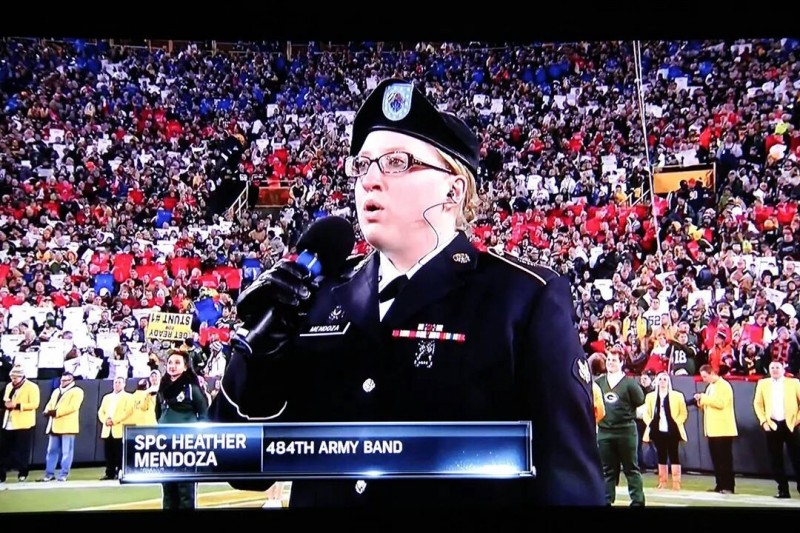 If you have ever been to a professional sporting event, then you would have heard the National Anthem being sung by a special guest. Have you ever wondered who these people are, or how they get selected to sing the Nation Anthem?

ABRA employee, Heather Mendoza, has been doing dual duty at both ABRA’s Glendale location and in the Army Reserves as a Specialist in the 484th  division. In addition, Heather has been a member of the Army band “Zeroed In” as a lead vocalist for 12 years, and sings all around the country, performing at military ceremonies, events, memorial services, parades and festivals.

According to Mendoza, “singing the National Anthem at Lambeau Field and during a nationally televised football game was a once in a lifetime opportunity.” She continues, “I have been singing for years and was up for the challenge of performing before a sold out crowd, I am truly honored to have been a part of it.”

Jeff Mohns, regional vice president of ABRA, had this to say about Mendoza: “Heather has been with ABRA Auto Body and Glass as a Customer Service Manager for more than four years and we couldn’t be more delighted with her success, military work, and her dedication to our country. We are a proud supporter of our veterans and active military employees. It’s exciting to see Heather honored on Sunday Night Football.”

Sunday’s football game between the Packers and the Bears was broadcasted on NBC and streamed live to troops in Afghanistan in honor of Veterans Day.

So the next time you are at a game and hear the National Anthem, it could be your local auto body repair shop employee, Army veteran, or in the case of ABRA’s Heather Mendoza, it is both.

Zulkhuu L. had this to say about Craftsman Auto Body Of Lane Court

You gyes did great job. Very nice customer service too Thank you very much